I was invited to speak at the Liberal Democrats Conference in Sydney last Sunday.   I began by explaining that while the delegates may have though homogenization was a term used exclusively for milk, that homogenization is also a technical term used in climate science, but with an altogether different meaning. It allows scientists to remodel historical temperature data so it’s closer to the heart’s desire.

These few words – closer to the heart’s desire – have been borrowed from that famous poem the Rubaiyat of Omar Khayyam. The stanza reads:

Ah, Love! could thou and I with Fate conspire
To grasp this sorry Scheme of Things entire!
Would not we shatter it to bits-and then
Re-mould it nearer to the Heart’s Desire!

Omar used the word “remould”, climate scientists say they are improving the data.

The end result is the same: something has been changed.

The scientific revolution rejected unnatural causes to explain natural phenomena, rejected appeals to authority, and rejected revelation, in favor of empirical evidence. Today, the biggest threat to science is from the sophisticated remodeling of data, known in climate science as homogenization.

An analogy can be made between the remodeling of scientific data, which is now common in a variety of disciplines from conservation biology to climate science, and “fitting up” people the police know to be guilty, but for whom they can’t muster enough forensic evidence for a conviction. This is also a form of “noble cause corruption”.

Why is it a form of corruption? Because we expect the criminal justice system to be fair, to be based on legitimate evidence. Science should also be about facts, and evidence.

Temperatures were recorded at the Darwin post office from 1882, but are only shown in Figure 1 from 1895, which is the first full year of recordings in a Stevenson screen.

The temperatures as recorded from the mercury thermometer in a Stevenson screen at the post office from 1895 to 1942 show statistically significant cooling of almost 2 degrees Celsius per century.

This clearly does not accord with the theory of anthropogenic global warming. And indeed these raw observational values are not incorporated into official temperature time series used to calculate national and global temperature trends. First the data is homogenized.

In particular, the Bureau of Meteorology truncate the record so it starts in 1910, rather than 1895. Then they drop down the temperatures as recorded at the post office by -0.18 degree for all values before February 1941, and by a massive -1.12 for all values before January 1937. This has the effect of creating a warming trend, as shown by the red line in the following chart, Figure 2.

The homogenized series for Darwin, which is incorporated into official data sets, shows warming of 1.3 degree Celsius, which accord much better with global warming theory.

Is this drop-down justified? Let’s consider some other series from northern Australia. 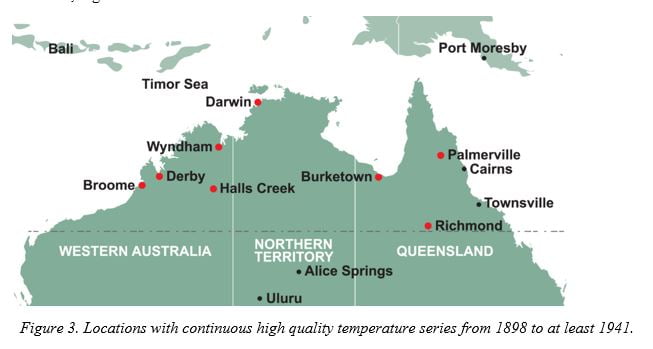 To be clear, I have compared Darwin post office against the series for these locations because they were recorded at the same site, in proper equipment (mercury thermometer in a Stevenson screen), and the individual series do not show any discontinuities when appropriate statistical tests are applied.

Considering the series from Western Australia, Figure 4, it is apparent that there is much inter-annual variation. This is typical of observational temperature data from around the world. While annual temperatures fluctuate from year to year, it is apparent that there is considerable synchrony between locations. Indeed, there are synchronous peaks in 1900, 1906, 1915, 1928, 1932 and 1936. Note that temperatures at Wyndham, Derby and Halls Creek all dip together in 1939, while temperature at Darwin decline from 1936, Figure 4.

Temperatures at Darwin are less synchronous with temperatures from northern Queensland, Figure 5. In particular the peaks in the Darwin temperature series appear to lag the Queensland series.

There is considerably synchrony between the Queensland locations with Burketown, Palmerville and Richmond all showing spikes in 1915. Of course this was an El Nino drought year, and the year that the Murray River ran dry in south eastern Australia. Interestingly the Queensland series all show a significant drop-down from 1939, Figure 5.

None of the temperature series, either from Western Australia or Queensand, show the expected global warming from 1898 to 1941.

The series for Richmond, which represents temperatures for the one location recorded by a mercury thermometer in a Stevenson screen, is actually remarkably similar to the un-homogenized series for Darwin, Figure 7.

What I’ve discovered, after looking at hundreds of such raw time series from eastern Australia, is that they tend to follow a similar pattern: there is almost always cooling in the first part of the record and then warming at least from 1960. Yet whenever I look at the homogenized official records for these same locations they all show statistically significant warming from the beginning of the record.

Let’s now consider the Bureau’s justifications for the homogenization of Darwin.

The first thing that the Bureau does to the Darwin temperature series is discard all the data recorded before 1st January 1910 on the basis it might not be reliable. Yet we know that a mercury thermometer in a Stevenson screen was the primary instrument used to record temperatures at the Darwin post office from March 1894, and that there was no site move, or equipment change, for the period to 1910. Yet this valuable 15 whole years of data from 1895 to 1910 are just discarded.

This largest drop-down of -1.12 degree Celsius is justified on the basis that the site became “overshadowed by trees, especially after 1937”. This is what is written in the official catalogue. If shading from trees were the cause of the cooling, then it’s curious that the adjustment is made for the period before the site ‘deteriorated’ because of shading. This is not rational. If the problem occurred from 1937, the correction should be for this period.

Furthermore, photographic evidence from the Northern Territory State Library does not support the hypothesis that the site became progressively more shaded, Figure 8.

What all of this ignores, is the cyclone that hit Darwin on 10th March 1937. According to the Northern Standard newspaper reporting immediately after the cyclone, “it raged and tore to such vicious purpose that hardly a home or business in Darwin did not suffer some damage… Telephone wires and electric mains were torn down by falling trees and flying sheets of iron, windmills were turned inside out, garden plants and trees were ruined, roads and tracks were obstructed by huge trees…”.

Is it possible that rather than the cooling being due to ‘shading’ from 1937, there was actually less vegetation following the cyclone? In fact, the drop in maximum temperatures is likely to have been due to removal of trees and shrubbery by cyclonic winds. It is more likely that vegetation which had previously screened the post office from the prevailing dry-season south easterlies that have a trajectory over Darwin Harbor, was removed by the cyclone.

While shading can create cooling at a site, a similar effect can be achieved through the removal of wind breaks.
In a study of modifications to orchard climates in New Zealand it has been shown that screening could increase the maximum temperature by 1°C for a 10 meter high shelter.

In conclusion, the homogenization of the record at Darwin is by no means unusual. I used the example of Rutherglen, in north eastern Victoria, in my request late last year to the Auditor-General of Australia for a performance audit of the procedures, and validity of the methodology used by the Bureau of Meteorology.

At Rutherglen a cooling trend of 0.35 degree Celsius per century in the minimum temperature series is homogenized into warming of 1.73 degree Celsius.

In support of this request to the Auditor-General a colleague, Tom Quirk, showed how the raw record for Dubbo in NSW is changing from cooling of 0.16 into warming of 2.42 degree Celsius per century through homogenization. Brisbane in Queensland is changed from cooling of 0.68 to warming of 2.25. Warming at Carnarvon in Western Australia is increased from 0.18 degree per century to 2.02, and so the list goes on.

At an online thread at The Australian newspaper’s website last Monday – following a terrific article by Maurice Newman further supporting my call for an audit of the Bureau of Meteorology – I noticed the following comment:

“Don’t you love the word homogenise? When I was working in the dairy industry we used to have a homogeniser. This was a device for forcing the fat back into the milk. What it did was use a very high pressure to compress and punish the fat until it became part of the milk. No fat was allowed to remain on the top of the milk it all had to be to same consistency… Force the data under pressure to conform to what is required. Torture the data if necessary until it complies…”

Clearly the Bureau uses force to remodel historical temperature data so it’s closer to what they desire.

This is not science. But given the Bureau’s monopoly, and the extent of the political support they received from both Labor and the Coalition, they can effectively do whatever they want.

Western elites are beset by the fear of a coming environmental apocalypse, and climate scientists at the Bureau of Meteorology have undertaken industrial scale homogenization of the historical temperature data to support this phobia.

“To the extent that it is possible for any human endeavor to be so, science is value-free. Science is a way of attempting to understand the world in which live from a rational point of view, based on observation, experiment and tested theory.”

“The alternative to a scientific approach”, according to Prof Carter, “is one based on superstition, phobia, religion or politics.”

What the Bureau does to the data from Darwin could even be described as a form of art, based on a mix of desire and phobia. It is not science, and we need to rally against it, against this homogenization.

A PDF version of this presentation with charts can be downloaded here:  http://jennifermarohasy.com/wp-content/uploads/2014/08/Marohasy-LibDemNationalConvention-Darwin-Feb2016-VERSIONF.pdf