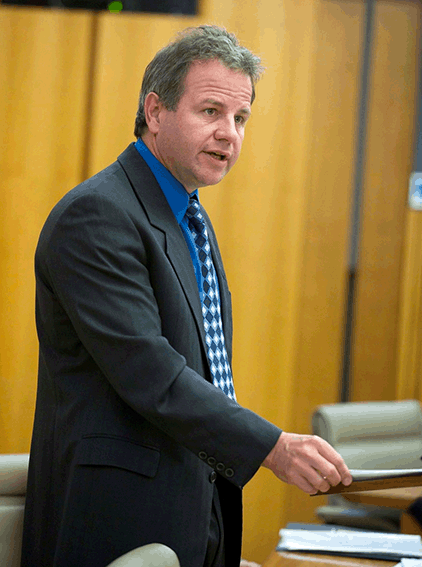 LATE yesterday Dennis Jensen, the Member for Tangney, spoke in the Australian Parliament about how the Australian Bureau of Meteorology plays “fast and loose” with critical temperature data.

At the end of this important speech, Dr Jensen calls for an audit of the Bureau and in particular the methodology it uses for compiling temperature data.

Q4. Given potential and actual conflicts of interest, could the Australian Bureau of Statistics, (ABS) rather than the Bureau of Meteorology, be tasked with the job of leading the high quality and objective interpretation of the historical temperature record for Australia?

Confirmation bias is a tendency for people to treat data selectively and favor information that confirms their beliefs. Such bias can quickly spread through an organization unless there are procedures in place to guard against groupthink. Groupthink – Psychological Studies of Policy Decisions and Fiascos (Houghton Mifflin Company, Boston, 1983) by Irving L Janis is the seminal text in the area and outlines how irrespective of the personality characteristics and other predispositions of the members of a policy-making group, the groupthink syndrome is likely to emerge given particular conditions; including that the decision-makers constitute a cohesive group, lack norms requiring methodical procedures and are under stress from external threats. This can lead to illusions of invulnerability and belief in the inherent morality of the group leading to self-censorship, illusions of unanimity and an incomplete consideration of alternative solutions to the issue at hand. All of these characteristics can be applied to the Bureau, which is particularly convinced of the inherent moral good in both its cause and approach to the issue of global warming.

The extent of the problem of groupthink within the Bureau, and the international climate science community more generally, became particularly evident in 2009 when the Climategate emails were released. These emails raised many disturbing questions about the way climate science is conducted; about researchers’ preparedness to block access to climate data and downplay flaws in their research; and about the siege mentality and scientific tribalism within the community. These emails show that managers at the Bureau including David Jones and Neil Plummer, rely on other climate scientists, particularly those at the heart of Climategate, for statistical advice and share the general contempt of the mainstream climate science community for rigorous scientific analysis.

For example, in an email dated 7th September 2007 Dr Jones wrote to Phil Jones from the Climate Research Unit that, “Truth be know,[sic] climate change here is now running so rampant that we don’t need meteorological data to see it.” In an email dated 5th January 2005, David Parker from the UK Met Office wrote to Mr Plummer resisting a suggestion that the period used to calculate temperature anomalies be corrected on the basis that “the impression of global warming will be muted.”

In 2006 Edward Wegman, professor at the Center for Computational Statistics at George Mason University, chair of the US National Academy of Sciences’ Committee on Applied and Theoretical Statistics, and board member of the American Statistical Association, was asked by the US House of Representatives to assess the statistical validity of the work of Michael Mann which contributed to many of the claims by the IPCC that the 1990s was the warmest decade and 1998 the warmest year of the millennium. In his final report, Professor Wegman made damning assessments pertaining to the statistical competence of leading climate scientists.[4]

In particular, and drawing an analogy with pharmaceutical research, Professor Wegman recommended:

Recommendation 3. With clinical trials for drugs and devices to be approved for human use by the FDA, review and consultation with statisticians is expected. Indeed, it is standard practice to include statisticians in the application-for-approval process. We judge this to be a good policy when public health and also when substantial amounts of monies are involved, for example, when there are major policy decisions to be made based on statistical assessments. In such cases, evaluation by statisticians should be standard practice. This evaluation phase should be a mandatory part of all grant applications and funded accordingly.

****
The full text of the letter can be read here… http://jennifermarohasy.com/questions-for-the-australian-bureau-of-meteorology/