The Australian Bureau of Meteorology has “confirmed” that it is been the hottest summer on record in Australia. But I’m sceptical.

The “record breaking hot summer” is apparently a statistical fact derived from simply averaging across 104 or 112 localities – depending on whom at the Bureau is providing the information.  No mention is made of how the temperatures for all of these localities have been “corrected” over recent years through the ACORN program [2]. In general the “corrections” are such that temperature records for specific localities pre-1970 are adjusted down, while records for specific localities post-1970 are adjusted up.

In their media release [1] attention is drawn to the town of Moomba in South Australia which apparently had the highest temperature recorded at 49.6 degrees C. Interestingly the station of Moomba only opened in 1972 – this of course is not reported in the same media release.

The Bureau’s media release goes on to claim this summer follows a pattern of extremely hot summers in various parts of the world over the last few years.

The phenomena whereby government climate scientists correct the historical temperature record to support their theory of anthropogenic global warming is not unique to Australia. In fact the Australian Bureau of Meteorology may be simply following instructions from The Team. The Team are, of course, that notorious in-group who run policy at the Intergovernmental Panel on Climate Change, the IPCC. In the leaked Climategate emails there is discussion involving The Team focused on the need to reduce global sea surface temperatures, SST, during the early part of the 20th Century by about 0.15 degree C.. By reducing, the blip in SST temperatures for example between 1940 and 1945, it is suggested that the rate and magnitude of global warming for the period 1910 to 1945 can be made to not exceed the rate and magnitude of warming for the 35 year to 2009.

Interestingly recent “corrections down” to historical global temperatures by the Goddard Institute for Space Studies, GISS, have been concentrated in this period, Figure 1. The net effect of the adjustments has been to generate a more smoothly increasing global temperature since 1880, and reduce a warming blip that occurred in the late 1930s and early 1940s. 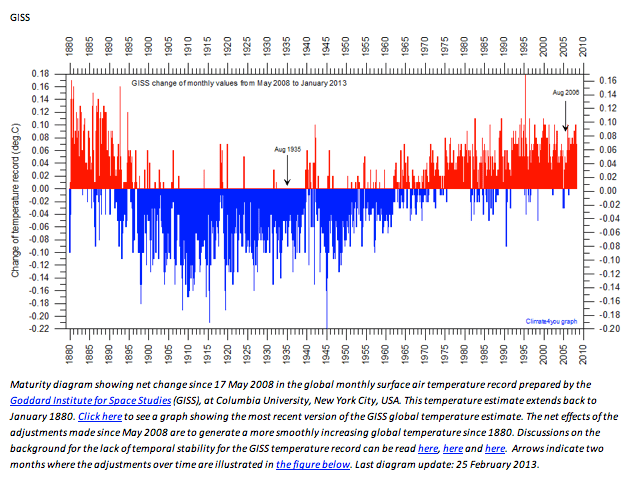 The US National Climatic Data Center has also been making “corrections” to the historical global temperature record, Figure 2.  Indeed through administrative means January 1915 can be made to appear significantly cooler than January 2013, Figure 2.

This used to be known as cooking the books, however, of course, our esteemed climate scientists have detailed justifications for all the changes they have been busily making to all the global historical temperature databases. 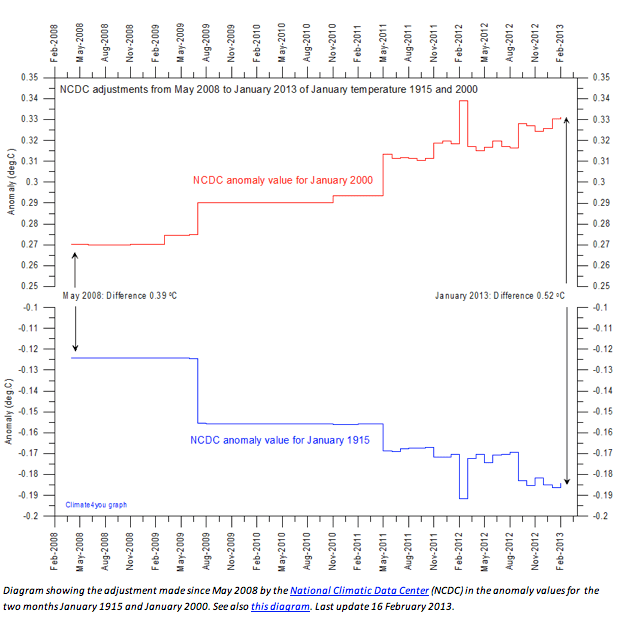 1. Issued March 1, 2013: Bureau of Meteorology confirms it’s been the hottest summer on record… http://www.bom.gov.au/announcements/media_releases/ho/20130301.shtml
2. A team of independent auditors, bloggers and scientists went through the BOM “High Quality” dataset and found significant errors, omissions and inexplicable adjustments, read more here… http://joannenova.com.au/2012/06/threat-of-anao-audit-means-australias-bom-throws-out-temperature-set-starts-again-gets-same-results/
3. Figures 1 and 2 are courtesy of Ole Humlum, Professor of Geosiences at the University of Oslo, Norway.  Click on the above charts for a slightly improved view. Visit http://www.climate4you.com for the best view and background information.