NEW UK Met Office global temperature data confirms that the world has not warmed in the past 15 years.

Analysis by the Global Warming Policy Foundation (GWPF) of the newly released HadCRUT4 global temperature database shows that there has been no global warming in the past 15 years – a timescale that challenges current models of global warming. 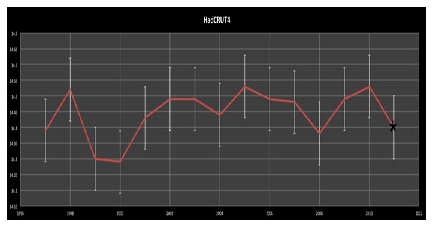 The graph shows the global annual average temperature since 1997. No statistically significant trend can be discerned from the data. The only statistically acceptable conclusion to be drawn from the HadCRUT4 data is that between 1997 – 2011 it has remained constant, with a global temperature of 14.44 +/- 0.16 deg C (2 standard deviations.)

The important question is whether 15 years is a sufficient length of time from which to draw climatic conclusions that are usually considered over 30 years, as well as its implications for climate projections.

The IPCC states that anthropogenic influences on the climate dominated natural ones sometime between 1960 – 80.The recent episode of global warming that occurred after that transition began in 1980. The world has warmed by about 0.4 deg C in this time. Whilst we live in the warmest decade of the instrumental era of global temperature measurement (post-1880), and the 90s were warmer than the 80s, the world has not got any warmer in the last 15 years.

In 2001 and 2007 the Intergovernmental Panel on Climate Change (IPCC) estimated that the world would warm at a rate of 0.2 deg C per decade in the future due to greenhouse gas forcing. Since those predictions were made it has become clear that the world has not been warming at that rate. Some scientists retrospectively revised their forecasts saying that the 0.2 deg C figure is an average one. Larger or smaller rates of warming are possible as short-term variations.

“Near-zero and even negative trends are common for intervals of a decade or less in the simulations, due to the model’s internal climate variability. The simulations rule out (at the 95% level) zero trends for intervals of 15 yr or more, suggesting that an observed absence of warming of this duration is needed to create a discrepancy with the expected present-day warming rate” (NOAA 2008).

We also note a comment in an email sent by Professor Phil Jones of the University of East Anglia Climatic Research Unit: “Bottom line – the no upward trend has to continue for a total of 15 years before we get worried.”

Whether the global temperature standstill of the past 15 years continues or is replaced by warming, as the IPCC predicts, only future data will tell. In the meantime the length of the standstill means that the challenge it offers for models of future climate prediction, and explanations for past warming, cannot be ignored.

“We are at the point where the temperature standstill is becoming the dominant feature of the post-1980 warming, and as such cannot be dismissed as being unimportant even when viewed over 30 years.”

“It is time that the scientific community in general and the IPCC in particular acknowledged the reality of the global temperature standstill and the very real challenge it implies for our understanding of climate change and estimates of its future effects.”

“It is a demonstration that the science is not settled, and that there are great uncertainties in our understanding of the real-world greenhouse effect when combined with anthropogenic and natural factors.”

This is a media release from the GWPF. More information with links here: http://thegwpf.org/the-observatory/5360-no-global-warming-for-15-years.html

*********
Technical note: The HadCRUT4 database has been released from 1997 – 2010. The 2011 datapoint has been estimated from the differences between HadCRUT4 and the two published versions of the previous dataset, HadCRUT3, as observed over the past decade. As the HadCRUT3 data includes 2011 it is possible to estimate HadCRUT4 as lying between the specified error bars.