Following the release of my recent technical report, Plugging the Murray’s Mouth: The Interrupted Evolution of a Barrier Estuary [1], the South Australian water minister, Paul Caica, made public comment that Lake Alexandrina has been a “predominately freshwater environment for the last 7,000 years”. The Minister also indicated that my claim that Lake Alexandrina was once part of an estuary is “myth and not supported by science.”[2]

In fact the relevant scientific literature, as published in peer-reviewed journals, indicates that the Lower Lakes were estuarine prior to the erection of the viagra sea dykes, known locally as barrages. But it is also revealing to simply consider the history of the region. The first map of Lake Alexandrina, drawn by John Arrowsmith in 1838 based on reports of water quality from the famous British explorer Charles Sturt, shows the waters of Lake Alexandrina to transition from salt to brackish to fresh. 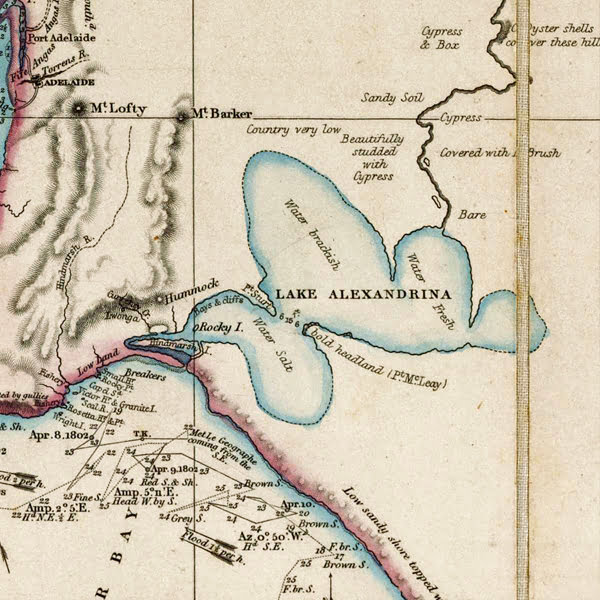 It appears that the South Australian government is also ignorant of the history of the lake with comment in important planning documents that: “The Lower Lakes have been predominantly freshwater for the last 7,000 years and that seawater ingressions, when they did occur, did not extend north of Point Sturt.”[3]

Point Sturt is clearly marked on the 1838 map. The map clearly shows that seawater ingressions extended into the main body of the lake turning the water brackish.

[1] The report can be downloaded here: http://jennifermarohasy.com/publications/

[3] Securing the Future: A Long-term plan for the Coorong, Lower Lakes and Murray Mouth, June 2010, Government of South Australia. Available online as a 13mb pdf.