I’ve been asked to speak outside Parliament House tomorrow morning, to the ‘Convoy of No Confidence’.   What an honour. 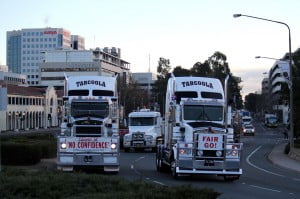 Following are my speech notes:

THERE is nothing more basic to our physical well-being than food, and Australian farmers are amongst the most efficient and responsible food producers in the world.  Yet they are increasingly demonised and their businesses right now under extraordinary and unnecessary pressure.

The pressure comes, at one level, from apparently arbitrary decisions made by this Commonwealth government, but the previous Coalition government was no better.

Decisions affecting agriculture increasingly reflect the values of an overweight metropolitan elite who have no empathy for, or understanding of, food production or food producers.

It is fashionable to denigrate the very people who keep our supermarket shelves piled high with affordable milk, meat, fruit and vegetable.  And so GetUp! – with members who mostly sit down – dictate ever more impractical but fashionable policies.

Apparently ignorant of the recent widespread flooding in the Murray Darling, there is even a GetUp! campaign claiming the region is on verge of ecological catastrophe.

But if GetUp! campaigners got up, and got out to the Murray Darling, they would see that the Basin has come roaring back to life since the drought broke.

Soaking rains returned to the Murray Darling last summer.  But you may be surprised to learn that despite the rain, the abundance of wildlife, and the full dams, many food producers along the Murray have a very limited water allocation.

There is water in even the largest storages, to the extent that some are dangerously full, yet many irrigators along the Murray are now on just 10 per cent of their allocation.

As Murrumbidgee irrigator Debbie Buller recently wrote to me:

“More than anything else, after years of struggle through the recent crippling drought and followed up by a series of devastating floods, we need to be given the opportunity to plan confidently for some very productive seasons based on current inflows, snow pack depth and dam heights.”

Instead Debbie and others are being encouraged to sell their water.  Sell their capacity to grow food.

The grand plan may be to run all the water down to the Lower Lakes in South Australia, ostensibly for the environment.

But it is not more fresh water that the natural environment of the terminal, coastal lakes need, it is a functioning estuary.

During the recent drought, the obvious and natural solution for the drying Lower Lakes was to open the 7.6 kilometre of barrage holding back the Southern Ocean.  But instead politicians and environmentalists, including the Australian Conservation Foundation, used the drying lakes to campaign against upstream food producers.

Yes, it is so fashionable to campaign against our most efficient food producers – our irrigators – to even blame them for the drought.

But as a nation we should be careful what we wish for.  The implications of recent policy decisions affecting agriculture, particularly water reform, will be far reaching.

We live in a land of drought or flooding rains.  Our climate is not benign and never will be – not even if this government introduces a carbon tax.

Without infrastructure and industry the Australian climate will starve you, or wash you away.

It is dangerous to take all we currently have for granted.

Fashionable, righteous campaigning has influenced government policies and undermined our productive base, our capacity to produce food.   But these same campaigns won’t ever, can’t ever feed you.

Fashion is the lowest form of ideology and fashion can’t feed a nation.