The Australian Bureau of Meteorology (BoM) has measured temperature using both traditional or liquid-in-glass (LiG) thermometers and the newer electronic probes in parallel at 38 stations over extended time periods.

On 1 Nov 1996, the BoM officially switched over from the old thermometers to the new platinum probes. Nevertheless, at the 38 stations mentioned above, daily measurements were continued to be taken from the old thermometers and recorded in paper logbooks. Temperature readings from the electronic probes were either manually entered into the BoM’s electronic database or captured automatically through the automatic weather station (AWS) network.

Therefore, the official temperature data (originating from the electronic probes after 1 Nov 1996) are available publicly in electronic form, which can be accessed via the BoM CDO portal. The bulk of the old logbooks are however not publicly available – they remain in the BoM’s paper archive.

The BoM has however made the paper records available of one station – Mildura (ID 076031). The Mildura paper records were provided as nearly 10,000 image files, containing weather data from 1989 to 2015. One page from a Mildura logbook is shown below. 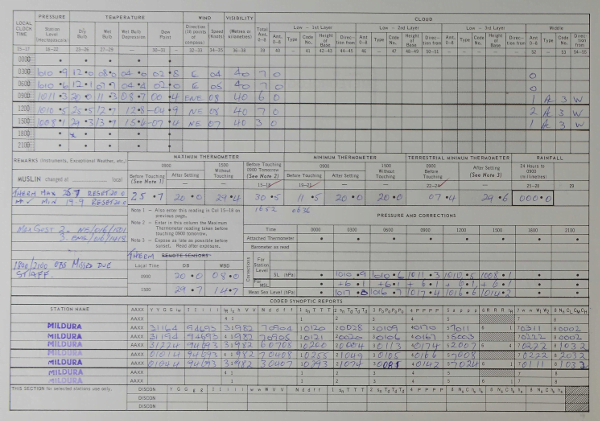 The weather data on these logbook pages can be transcribed either through computer vision or manual reading. A number of companies provide such data extraction services. An initial analysis into a part of the Mildura record suggests that the old thermometer data are significantly different from that obtained by the newer platinum probes.

The preliminary analysis was performed by transcribing some of the temperature data from the logbook images, and then comparing it with the official CDO data for the same dates. This work should continue – the following steps are required to complete this task:

Derivation of the official warming trends should therefore be reconsidered – and the first step is to evaluate what the trend would have been if electronic probes were never installed at these sites where parallel records are available.

Comparing the official warming trend (obtained from a mix of classical and electronic thermometers) with this alternative trend (to be obtained from only classical thermometer data) will provide an indication of the equivalence between the two types of thermometers.