ACORN-SAT is not satellite data. It is the Australian Climate Observations Reference Network – Surface Air Temperature dataset. It is derived from temperature observations taken at 1.2 meter above ground-level, i.e. surface air.

ACORN-SAT is the BoM’s official temperature record created by applying homogenisation techniques to a multitude of raw temperature readings. These readings were taken daily at 112 sites (which includes 112 weather stations and several neighbouring stations) using liquid-in-glass (LiG) and electronic thermometers, starting from 1910. The thermometers of each weather station are located in a standardised Stevenson screen, or box protecting weather sensors from the environment.

The 112 ACORN-SAT sites are shown on the map below. 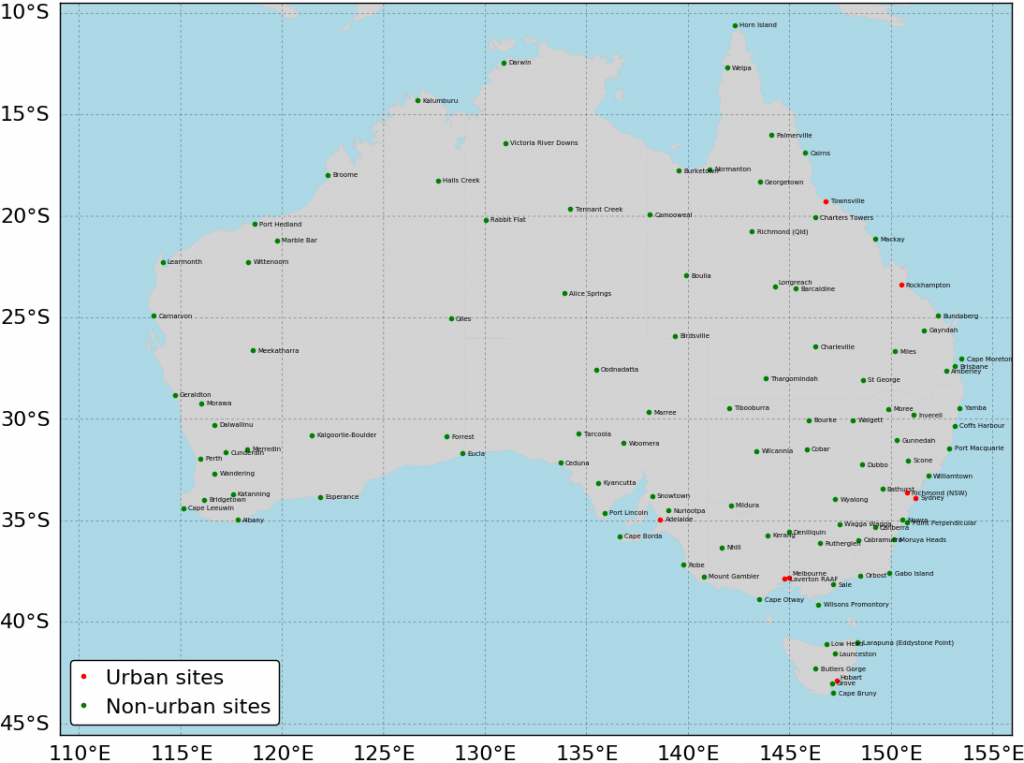 The BoM method of homogenising data from individual sites
Data originating from each of the 112 sites are homogenised using statistical methods and metadata – or documents detailing the history of each station and its equipment. The following two stages are applied:

The first ACORN-SAT version was published in 2011, and the second (and current) one in 2018. The methods used in V2 are similar to V1, although the newer version incorporates more data (new measurements and recently-digitised historical records), and technical updates. Overall, V2 indicates a 23% stronger warming trend than V1.

A comparison between ACORN-SAT V1 and V2 for each of the 112 sites is provided here.

Calculating regional averages and trends from homogenised data
To calculate average temperatures for large regions (e.g. Australia as a whole, entire states or other areas of interest such as the Murray Darling Basin), a regular grid with 25 km resolution is used as area-weighting mechanism. The contribution of each temperature measurement in the average is thus proportionally scaled according to each station footprint or land area being represented. The calculation of average temperatures is performed as follows.