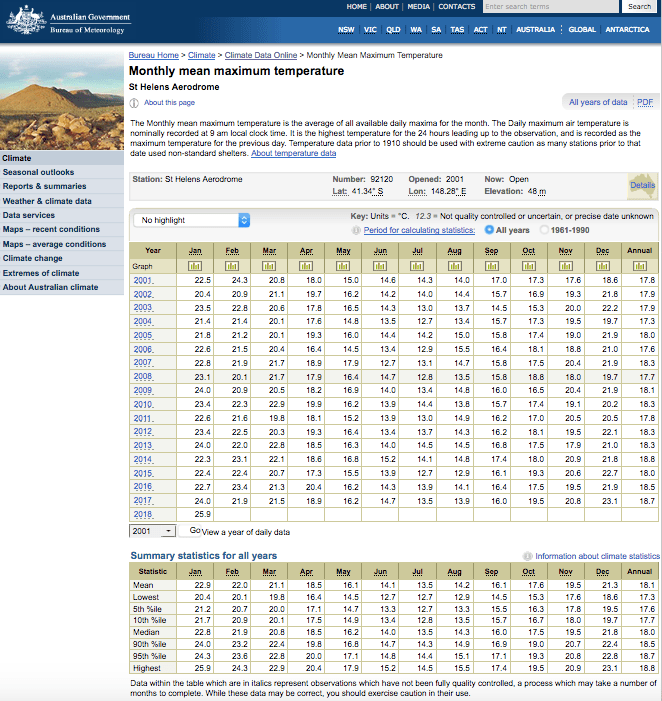 LAST week, Andrew Johnson, CEO of the Australian Bureau of Meteorology, wrote that the Bureau’s “stewardship of Australia’s temperature record” had been found to be scientifically sound [1]. He also claimed it was in accordance with World Meteorological Organisation guidelines.

If it was scientifically sound, or in accordance with WMO guidelines, then it might at least be accredited – but it’s not.

“The Bureau has quality system certification in place (ISO 9001) for its aviation forecasting activities, to conform with the regulations of the International Civil Aviation Organization. This certification covers the management tools and processes ensuring that all the 80 or so meteorological products the Bureau produces meet client needs. The certification does not extend to measurement quality, including AWS data and messages, nor to the associated derived quantities and data streams.

The above two paragraphs are a direct quote from page 11 of a document entitled ‘Review of the Bureau of Meteorology’s Automatic Weather Stations’ published by the Bureau in September 2017.

To be clear, we have an organisation, costing the Australian tax payer about 1 million dollars per day, that operates largely in accordance with its own standards – that are ever changing.

This January, for the very first time ever, we even have weather stations that have already computed the monthly average maximum temperature for January.

I am writing and posting this note at my blog on Monday 22nd January – a full 9 days before the end of the month, before all the daily values are in for January 2018.

This premonition that January’s mean monthly maximum temperature at St Helen is 25.9 degrees Celsius may all be an administrative error or a technical glitch. It may be easily explained and corrected. Then again, climate scientists across the world have form on this sort of thing. Remember the Climategate email sent from Geoff Jenkins to Phil Jones on 22 November 1996 suggesting they just make-up a value for Australia for December 1996 [2].

Remember all the fun we had last year over 1995 global temperatures,
with early release of information (via Oz), “inventing” the December
monthly value, letters to Nature etc etc?

I think we should have a cunning plan about what to do this year,
simply to avoid a lot of wasted time.

I have been discussing with David P and suggest the following:

3. We assume that Dec SST anomaly is the same as Nov

5. We feed this selectively to Nick Nuttall (who has had this in the
past and seems now to expect special treatment) so that he can write
an article for the silly season. We could also give this to Neville
Nicholls??

6. We explain that data is provisional and how the data has been
created so early (ie the estimate for Dec) and also

7. We explain why the globe is 0.23k (or whatever the final figure is)
cooler than 95 (NAO reversal, slight La Nina). Also that global annual
avg is only accuirate to a few hundredths of a degree (we said this
last year – can we be more exact, eg PS/MS 0.05K or is this to big??)

8. FROM NOW ON WE ANSWER NO MORE ENQUIRIES ABOUT 1996 GLOBAL TEMPS BUT
EXPLAIN THAT IT WILL BE RELEASED IN JANUARY.

9. We relesae the final estimate on 20 Jan, with a joint UEA/MetO
press release. It may not evoke any interest by then.

10. For questions after the release to Nuttall, (I late Dec, early
Jan) we give the same answer as we gave him.

Are you happy with this, or can you suggest something better (ie
simpler)? I know it sound a bit cloak-and-dagger but its just meant to
save time in the long run.

Im copying this to DEP and CKF also for comments.

*********
UPDATE: Within hours of this blog post the value for January 2018 was removed by the Bureau for St Helens, and other sites.