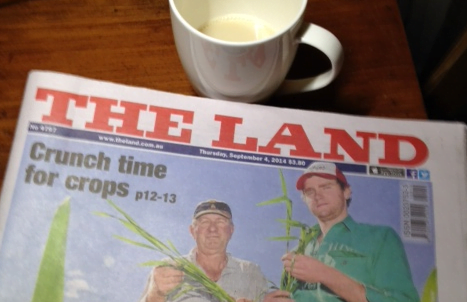 OLD newspapers hold a lot of information, some of it very valuable. I’m not only referring to last week’s The Land, but clippings that date back to editions published one hundred or more years ago.

For example, in the Sydney Morning Herald on Tuesday 5th January 1909 it was reported that Bourke was experiencing a heat wave with temperatures ranging between 103 and 125 degree Fahrenheit (39 to 51.7 degree Celsius). It’s perhaps the hottest temperature ever recorded anywhere in Australia.

The recording of 125 degree Fahrenheit on 3rd January 1909 was taken from a new Stevenson screen installed in the yard at the Bourke post office in August 1908.

According to the Bureau of Meteorology there are no reliable records before 1910 because there were few Stevenson screens.

Well maybe just one in Bourke?

Again, if you check the old newspapers, well, according to the Rockhampton Morning Bulletin on Saturday 28th September 1889 government meteorologist Clement Wragge was fitting a Stevenson screen at the telegraphic office before travelling on to Boulia and Cloncurry in western Queensland to do the same.

How pesky are these written reports when the Bureau would have us believe there is no such thing as a reliable temperature record before 1910.

It is interesting that the record hot day in Bourke on 3rd January 1909 was also written into the Meteorological Observation book that was kept in the Bourke post office back then, and can now be found in the national archive at Chester Hill in western Sydney.

I went and checked not only the old newspapers but also the book in the national archive, because, guess what? The Bureau of Meteorology is claiming it was all a clerical error. They have scratched this record made on 3rd January 1909 from the official record for Bourke, which means it’s also scratched from the NSW and national temperature record.

They have also wiped the heatwave of January 1896. This was probably the hottest January on record, not just for Bourke, but Australia-wide. Yet according to the rules dictated by the Bureau, if it was recorded before 1910, it doesn’t count.

In ignoring the old records the Bureau is denying the Australian public valuable information. Its dangerous and its irresponsible.

We need to know both how hot and also how dry it was in the past if we are to adequately prepare for the future, whether or not the theory of anthropogenic global warming is ever proven.

So rather than working to make the data fit the theory, the Bureau should focus on keeping an accurate record.

This could start with them reinstating that record hot day in Bourke on 3rd January 1909. After all if it was published in the press, and in the official book at the Bourke post office it must be true. Not to mention that it was also very hot in Brewarrina that day, a warm 123 degree Fahrenheit according to the old newspapers.

*****
This article was first published in last week’s The Land newspaper.