IN January 2013, from the comfort of their lounge rooms, many Australians watched the forests of the Pilliga burn. The word Pilliga wasn’t mentioned in the sensational reportage as such. The stories were primarily about the devastation and drama of Australian bushfires. Mention was made of the town of Coonabarabran and of the Warrumbungles National Park. 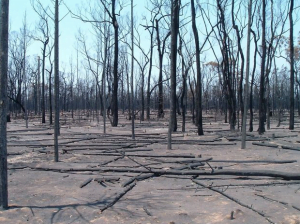 The extent of the bushfire that ravaged the region – that also includes Baradine, Coolah and Dunedo – was in part a consequence of the creation of large areas of national park by a government that promised the creation of the National Parks would ensure the permanent conservation of the forests. There was no mention of this false promise in any of the television reportage.

Yet it is such recent history. Indeed in May 2005 then Premier of NSW, Bob Carr, banned logging in many of the Pilliga forests converting them to National Park and claiming this would ensure their “permanent conservation”.

Bob Carr said that these forests were iconic, the inference was that they were natural, and it was clearly stated that their conversion to National Park would ensure conservation. In reality most of the Pilliga forests are less than 160-years-old and were the creation of a timber industry.

When European explorers first saw this country in the 1820s they described much of the region as grassland and open woodlands. Pastoral leases followed and by the early 1870s it was estimated that 25,000 sheep and 30,000 cattle were grazing where forests would later grow. Severe drought resulted in stock deaths and the abandonment of the leases before flooding rains in the early 1880s triggered a massive germination of cypress and Eucalyptus.

Timber communities established. Wood cutters thinned the cypress, carefully managed cool fires to reduce the fuel loads that quickly accumulated on the forests floor, created fire trails and described themselves as the “eyes and ears” of the forest. So, instead of grassland or dense acacia, magnificent Pilliga forest grew.

Armchair environmentalists came to revere the same forests, writing of their incredible biodiversity and about the barking owls.

The timber communities began losing access to the forests that they had created in 1967 when 80,239 hectares became the Pilliga Nature Reserve. In 1986, under a new government-enforced management regime, the annual rate of cypress pine sawlog production was reduced to 53,000 cubic metres. The annual forest growth rate was estimated to be 70,000 cubic metres.

In 1999 there was a new and aggressive push to convert more state forest to national park. A decision was due in 2002 but it was not until May 2005 that the timber industry, until then generating $38.4 million and employing 420 people, was told that it finally had to go.

The Australian public was told that the NSW government had saved these iconic forests.

But it is the victor who gets to write the history in his favor, and so the origin of the magnificent Pilliga forests that were so badly burnt this summer, and the timber communities that nurtured them over more than three generations is ignored – to one day be forgotten.

This is a modified version of an article by Jennifer Marohasy first published in The Land newspaper. The image is from a photograph from a bushfire in the Pilliga forest in, probably, the 2006-2007 summer.